Gints Zilbalodis
LV/ EU
Jury member
vimeo.com/gints
twitter.com/gintszilbalodis
Gints Zilbalodis (1994) is a Latvian filmmaker and animator. His debut feature film “Away” which he made entirely by himself won the Best Feature Film Contrechamp Award in Annecy (2019). It has been selected in more than 85 festivals and sold in 18 territories. His fascination for filmmaking began at an early age watching classic films and making shorts and commercials. Prior to Away he made 7 short films in various mediums including hand_drawn animation, 3D animation and live-action and often mixing their characteristic aesthetics. Currently he’s working
on his second animated feature, “Flow”.

Dominique Seutin
BE / EU
Jury member
animafestival.be
Dominique Seutin studied Contemporary Art and Film Aesthetics at the Université Libre in Brussels. Since 22 years she is part of the Anima festival and is the director since June 2020 together with Karin Vandenrydt. Dominique also shares her animation film knowledge to students, young professionals and other festivals in Belgium and abroad as programmer, selection or jury member.

Orestis Andreadakis
GR/EU
Head of Jury
www.filmfestival.gr
Orestis Andreadakis is the Director of the Thessaloniki International Film Festival and Thessaloniki Documentary Festival. He was a founding member of the Athens International Film
Festival “Opening Nights” (1995) and the Athens Open Air Film Festival (2010), where he was a director from 2007 to 2016. He has worked as a film critic and a journalist in newspapers,
magazines and television and he has designed, curated and presented a number of art exhibitions in Athens, Thessaloniki, and Geneva. In 2017, he was the curator of the Greek Pavillion of the 57th Venice Biennale. In 2013, he was decorated as a Chevalier dans l’ Ordre des Arts et des Lettres by France. Marlyn Spaaij
NL / EU
Jury member
marlynspaaij.com
@marlynspaaij
Director-writer-storyboard artist Marlyn Spaaij is amongst the key creative professionals in the Dutch animation industry. Graduated from the HKU and St Joost academy, she was storyboard supervisor on American Girl’s 2D series Wellie Wishers (2017) and storyboard artist on the 3D series of Chinese kids brand Dr. Panda (2018), as well as character animator on the 2D feature films Cobain: Montage of Heck (2015) and Triple Trouble (2014), a.o.
Currently Spaaij is directing her debut animated short Trouble in Mind, produced by Jantiene de Kroon, with support of the Dutch Film Fund and ARTE Germany’s Nadja Dumouchel as script consultant. The project got selected for European Short Pitch 2016 and won best pitch. Her debut feature film Sisters of the Mist (85’), produced by Lemming Film, is currently in development. This animated feature was selected for Cartoon Springboard 2017 and Cartoon Movie 2019 and has the financial support of the Dutch Film Fund and Creative Europe. Her debut graphic novel Sisters of the Mist, published by Flying Eye Books, is released in the UK and will be released in the US, Canada this summer.

Antonis Papatheodoulou
GR/EU
Jury member
www.antonispapatheodoulou.com
Βorn in 1977 in Piraeus, Antonis Papatheodoulou studied animation and works as a Creative Director. Since 1999 he writes and translates stories, songs and scenarios for children, participates in activities for children's books and meets young readers all around Greece and abroad.
His books have been honored with two State Prizes, prizes of the Greek section of IBBY, the magazine Diavazo, the Reader and the Public as well as the International Compostela Prize and have been included in the White Ravens lists of the International Children's Library of Munich. His stories have been translated into Spanish, Portuguese, Galician, Basque, Catalan, Chinese, Swedish, Korean, English and Japanese and adapted for theater and puppetry.

Fermín Solís
ES/EU
Head of Jury
ferminsolis.blogspot.com
@fermin_solis
Fermín Solís (1972) is a renowned Spanish cartoonist, animator and illustrator, who alternates between working as a comic book artist, a textbook illustrator and a children’s book creator. His books have been published by leading independent publishers in the United States, Canada and France. He won the prize known as Certamen de Cómic e Ilustración at INJUVE in 2002 and the prize known as Autor Revelación in the Barcelona Comics Festival (Salón del Cómic de Barcelona) in 2004 and he has been nominated for the Comic de Barcelona, INJUVE and the National Comic Award.
Ηis illustrations have appeared in El País, National Geographic, Kids and Rockdelux. He is the author of numerous graphic novels and books. His graphic novel “Buñuel in the Labyrinth of the Turtles” inspired the Spanish director Salvador Simó to make the namesake animation movie. 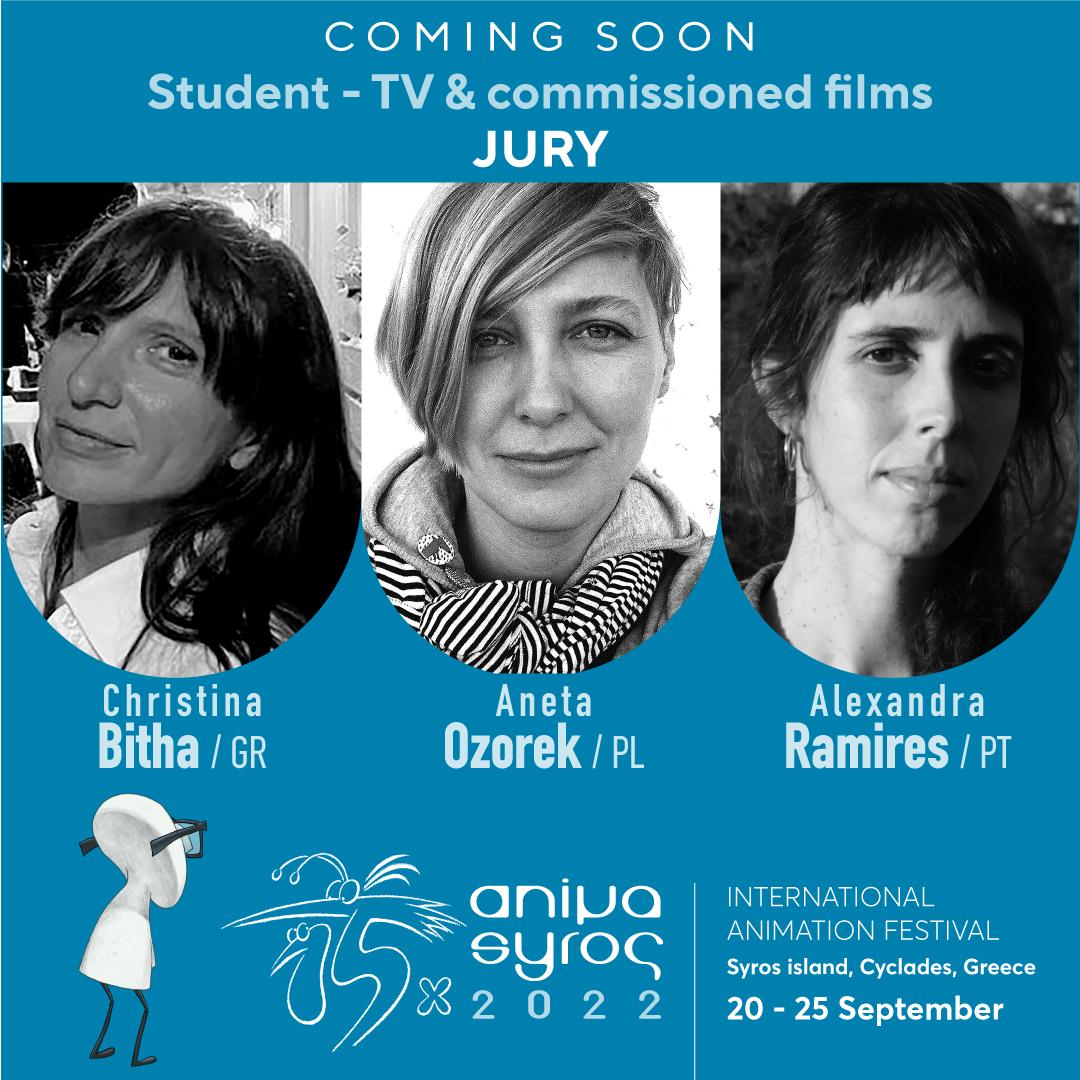 Alexandra Ramires
PT / EU
Jury member
@al3rami
Alexandra Ramires graduated in painting at the Faculty of Fine Arts, University of Lisbon and has been working in animation films since 2009. In 2013 she moved to Porto to join the team of the animation studios of the production company Bando à Parte. In 2018 this studio takes the form of a cooperative - BAP - Animation Studio - that is a collective of animation directors that collaborate regularly on each other's films of which Alexandra is a founding member. In 2017 she directs her first film, “Drop by Drop” together with Laura Gonçalves, this was a film with national and international recognition having been present in festivals like Cannes and Toronto. “ELO” ( TIE ) is her first solo film that currently has a strong recognition in festivals around the globe.

Aneta Ozorek
PL / EU
Head of Jury
@tutulisek
www.kaboomfestival.nl
logo kaboom
Aneta Ozorek is an Artistic Director of Kaboom Animation Festival, film curator, and education expert. Born in Poland, she has an extensive industry experience in the organization of film events, workshops, exhibitions, and festivals on the European market. She is a Head of Short section of CEE Animation Pitching Forum and member of the board of REX Animation Film Festival and Short Film Conference. She is also Polish Ambassador of European Animation Award, and she is member of a jury at Berlinale, Fantoche Animation Film Festival (Switzerland), Odense Film Festival (Denmark), Primanima (Hungary), Anibar (Kosovo), Kineko (Japan) and many others. She illustrated seven books for children and two vinyl covers.

Christina Bitha
GR / EU
Jury member
Βorn in Athens, she studied Law at the National and Kapodistrian University of Athens and as a devoted cinephile, she got an MA in Film Studies and European Cinema from the University of the West of England, Bristol. She has worked in many greek radio programmes (KLIK FM, BEST 92.6), press (Epsilon, BIMA, Marie Claire, etc.) and television (as a music editor in TV series). She spent two years in Paris, where she collaborated with Unifrance, the National Organization for the Promotion of French Films Abroad, as well as with the popular film show On Aura Tout Vu, among others. Since 2015, she has been COSMOTE TV's correspondent at major international film festivals, as well as the Academy Awards and the European Film Awards (EFA).Since 2019 he is a member of the European Film Academy. Katherine Reilly
US /GR / EU
Jury member
Author, Educator and LGBTI+ rights activist, Katherine Reilly is a Greek-American born in Chicago Illinois and has dedicated herself to the field of education and specifically that of English Literature. She is the first openly out transgender educator in Greece with years of experience in the educational field. As an author, she has written a total of 25 books, six of which are personal publications while the rest, on behalf of an International Publisher regarding English Language learning and Information Technology. Katherine is an avid fan of comics and animation, also having conducted voiceovers for children’s books. In her free time, she enjoys working as a scriptwriter for short films and children’s plays.

Vasilis Sotiropoulos
GR / EU
Jury member
elawyer.blogspot.com
Vasilis Sotiropoulos was born in Athens in 1978. He is an attorney-at-law. at the Supreme Court (Court of Cassation) of Greece and holds a Master’s Degree in Public Law. In 2005 he founded the first Greek legal blog, e-lawyer, in an attempt to generate debate on the protection of personal data and respect for civil liberties on the Internet. He is always looking for ideas for institutional innovations that bring people closer to their constitutional freedoms. With that in mind, he was the first elected Ombudsman of the City of Athens in 2012. Alongside a group of co- workers they created this structure from scratch in Athens for the prompt resolution of disputes between the citizens and the City of Athens. Working on LGBTQI+ rights he has served as a member of the National Commission of Human Rights. In 2021 he was an Academy of Athens award winner for his legal study on “Free cohabitation (unmarried and cohabiting) in a comparative examination".

Benoit Berthe Siward
FR/ EU
Head of Jury
@thesiward
www.animationshowcase.com
Benoit Berthe Siward is aν LGBTQ+ activist, creator of the inclusive group LGBTQ+ in Animation, in Annecy in 2018, who created a political campaign to convince the French Government to ban so-called Conversion Therapy in 2022.
He started his career as a filmmaker and CG artist in France and in London for more than 6 years before he became the film strategist founder of The Animation Showcase: A set of screenings presenting the best animated shorts to the creative industry and in the major animation studios around (Pixar, Disney, Dreamworks, Illumination, Netflix...) . He created the first free Streaming Platform for the industry screening animated content for the animation industry. He helped several animated films to get seen and recognized within the industry and lead Awards campaigns for films who received 13 Oscars nomination over the last 5 years. The last film he worked on, ”The Windshield Wiper” won the Oscar award for Best Animated Short Film in 2022.