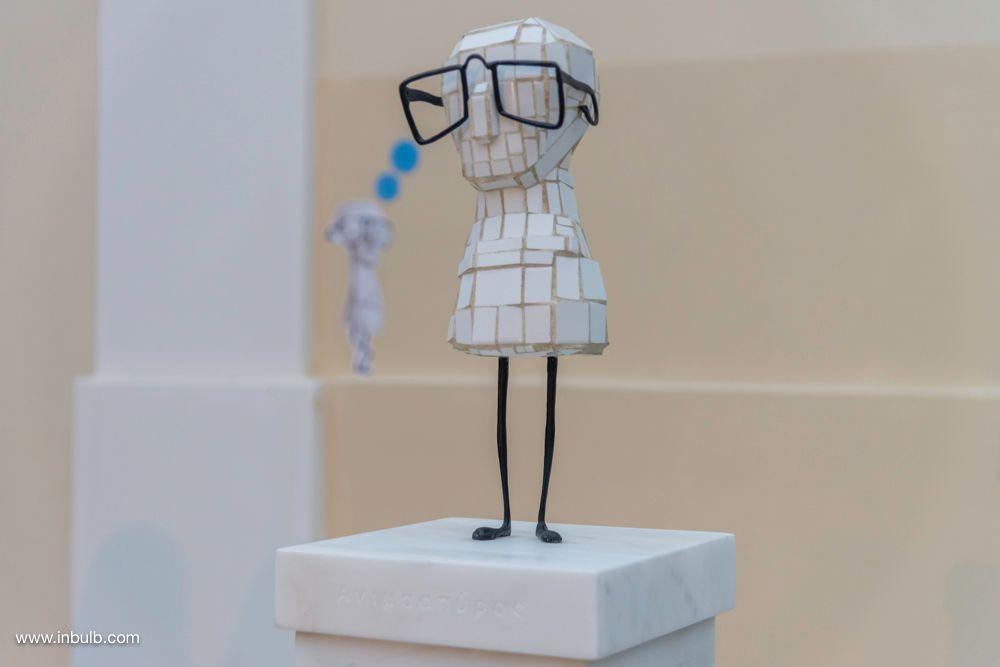 Animaspyros, the Festival’s mascot was created in 2008, by visual artist and illustrator Petros Christoulias, with references to the global symbol related to the pre-historic Cycladic art: the Cycladic figurine.

By elaborating on the minimalistic form of the figurine, one realizes that the face has only one element, which stands out: the nose. This element led the creator to focus on the figurine’s «sight» by putting onto it a big and funny pair of glasses. The triangular head with the non-firm chin instantly brings to mind a caricature of Woody Allen; a face that has become a director’s archetype image. By emphasizing on the nose and by adding two simple legs, our mascot symbolizes both the place and the content of the festival. Our mascot’s name is “Animaspyros” by combining the words “animation” and -the Greek male name- “Spyros”, which creates alliteration with the word Syros! The mascot was developed into a 3D figure by Konstantinos Petrou (character developer) and animated by Panos Xenakis. Watch the video here.

On the festival’s 10th anniversary (2008-2017), sculptors Giorgos Kontonikolaou, Christos Bligiannos and Ilias Sipsas from the 2nd Sculpture Workshop of Prof. George Lappas, under the supervision of Prof. Aphroditi Liti of the Athens School of Fine Arts created a sculture of Animaspyros. Ιt was inaugurated by George Marangos, Mayor of Syros–Hermoupolis at the time, on 30 September 2017, and is now permanently located at the patio of Syros-Hermoupolis City Hall.