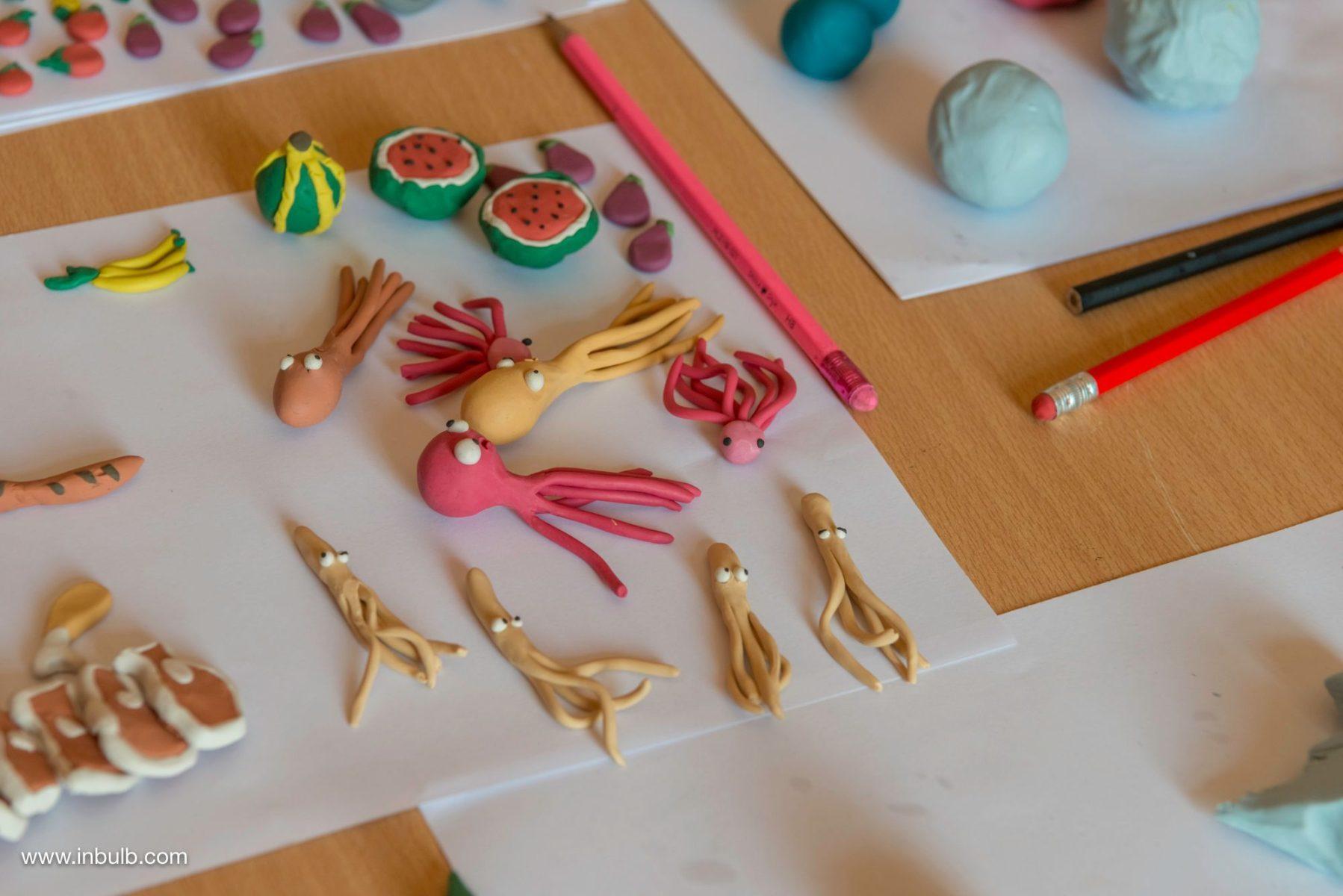 The art of animation is a cinematic genre with many forms and expressions that are mainly divided into two-dimensional (2D) and three-dimensional (3D) techniques. The following are techniques used in the animation workshops of Animasyros International Animation Festival.

The term traditional or classical animation as it is also called, refers to painted images on paper or other media. Traditional animation is also known as cell animation. Here the creator draws by hand drawings called frames.

The term stop motion animation is used to describe works where the creator, by moving objects from the real world and photographing the movement in separate frames, creates the illusion of movement.

The most common two-dimensional animation technique where the creator draws the action frame by frame on papers which are then filmed one by one.

3D animation technique with characters made of plasticine. The action develops with the gradual deformation of the original form of plasticine.

Two-dimensional technique in which various objects (paper, fabric, photographs) move in front of a fixed camera, the parts of which can be independent, moving with joints or magnets.

Intermittent shooting with live actors. The actors pose, are filmed, change positions and are filmed again. As the shot is discontinuous the result is a spasmodic movement.

3D animation technique starring dolls with joints that the creator moves at will.

THE STEPS OF ORGANIZING A MEDIA LITERACY WORKSHOP

The structure of the process followed for the organizing of an informal education action is multifaceted, guided by the target group and its needs in order to achieve the best possible result both on a teaching and artistic level.

The process is divided into two stages:

1. The preparation that includes the preparatory actions of the media literacy workshop as well as the material and technical details that must be completed

2. The implementation that is the “essence” of the educational action and concerns the stages of production of an animation film from the conception of the idea to the production.

1. Search for an educator based on the target group

Communicating with the network of animators-educators is the first step in the preparation of the workshop as the educator must adapt to the needs of each target group and guide it in a functional way. The smooth cooperation between the animator and the target group is particularly important for the development of the workshop.

2. Finding a theme in collaboration with the educator

Social issues, cultural stimuli, current issues and the daily life of the participants can be a source of inspiration for informal education activities. The aim is for the theme to be comprehensible and interesting for the criteria of the target group so that they can respond creatively and educationally in the workshop.

3. Search for the appropriate technique based on the target group and the theme

An equally important element is the selection and initiation into one of the animation techniques, which can be used by the target groups to create the deliverable film. Age is one of the main criteria for distinguishing groups as it delimits the work context and the degree of difficulty.

A key chapter in the preparation of informal education actions is the finding and the proper organization of the venue with the necessary logistical equipment. For these reasons, it is necessary to record the material needs in collaboration with the educator for the smooth implementation of the workshop.

5. Registration of participant applications and obtaining consent for the processing of personal data

For their participation in the workshop, the members of the target group submit an application with their personal details (name, email, phone, age) which are kept by the Educational Programs Coordinator.

Then, for the validity of their participation, the participants will have to fill in a statement of consent for the processing of personal data in case a video recording or internet retransmission of the workshop on social media occurs. As part of this process, all necessary measures are taken to protect the personal data of the participants.

IMPLEMENTATION OF THE WORKSHOP
1. Introduction to the world of animation and the technique that will be applied

The first section of a workshop includes an introduction to the world of animation, the techniques in general but also basic information about the theme and the technique that will be applied in each workshop. This familiarizing with the animation is made in the form of a lecture-presentation of informative material by the educator.

After introducing the theme, the educator and the target group together create a canvas of ideas and then the flow of the story that they will create.

3. Construction of the “heroes” and the setting, using the materials (cardboard, markers, plasticine, etc.)

The basic stage of the media literacy workshop process is the construction of the set and the “heroes” that will be used for filming. Participants use their artistic skills in painting, drawing, paper / plasticine constructions or other materials to breathe new life into their story.

4. Filming of “moving images” and recording

After the completion of the constructions, it is now time for the “animation” of the heroes through the movement. The figures “move” and come to life through many photo frames. At the same time, natural sounds or songs can be recorded with the help of the participants in order to accompany the short film of the target group musically.

5. Editing of the material by the educator and delivery of short animation video

The final stage of the implementation of the workshop includes the processing of the audiovisual material shot by the educator. In particular, the “moving images” are joined through the montage, giving flesh and blood to the story that the educator created with the participants. The result of each workshop is an animated short film.

Previous Section : National Center Of Audiovisual Media And Communication
Next Section : 13 Workshops- Milestones In The History Of The Festival